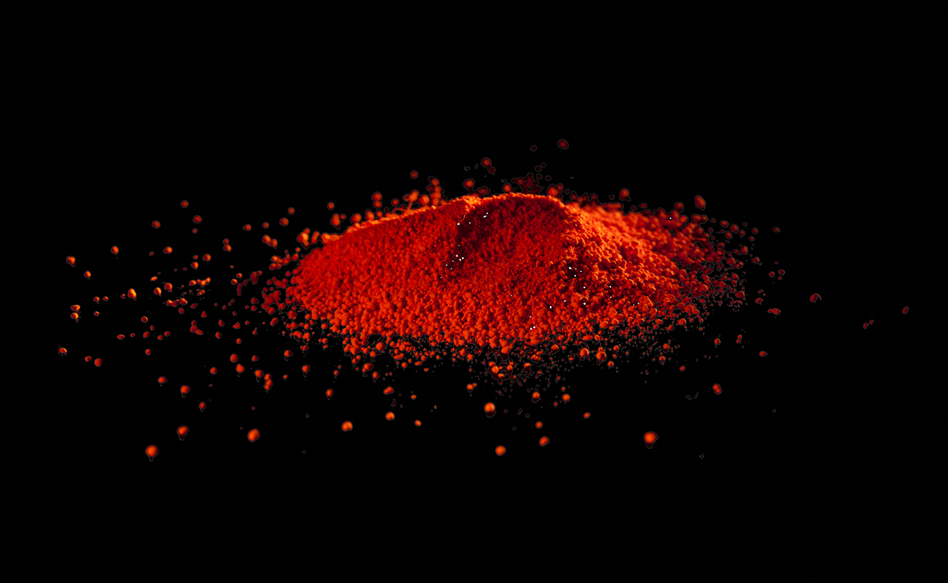 Vermillion: from mercury and sulphur to harmless pigments

The history of the wonderful red-orange vermillion has some black undertones. The colour was for a long time extracted from the highly poisonous mineral cinnabar, which has a high content of both mercury and sulphur. It was quickly learned how to make vermillion using these ingredients. It wasn’t until the end of the 19th century, however, that a considerably less harmful alternative was found based on cadmium. These days vermillion is made from modern, harmless and stable pigments.

Vermillion: from mercury and sulphur to harmless pigments

Unaware of the harmful consequences for one’s health, vermillion was extracted from mercury and sulphur-rich cinnabar long before the common era. The Romans even processed it in lipstick, which certainly did no good to the health of the ladies. The mineral itself is deep red and has to be ground to a pigment before it can be used in paint. The finer the grinding, the fierier the red. The 15th century painter Cennino Cennini writes about this in his famous ‘The Craftsman’s Handbook’: ‘If you were to rub it every day for twenty years it would simply become better and more perfect’. For the trainee journeymen of the Renaissance and Baroque periods it was therefore hard work to get the required intense red orange colour from the hard mineral.

It is generally accepted that vermillion could be produced synthetically already back in the eighth century. This was done by heating a mixture of mercury and sulphur in a pot sealed with clay. This would produce a red mercury sulphide or vermillion. The heating process was an art in itself, and in the 17th and 18th century skilled Dutch ‘vermillion heaters’ earned an international reputation with their excellent ‘vermillion pots’. The mercury was extracted from mercury mines, the largest of which can still be found near the Spanish city of Almadén. Prisoners were used to mine the mercury, many of whom succumbed in the mine shafts to the fatal mercury vapour.

At the end of the 19th century the original vermillion was superseded by the red cadmium pigment, which in addition to being better for one’s health is also more durable. The mercury vermillion would in time lose its colour intensity due to chemical changes. Recent research has shown that this occurs in two phases under the influence of the chloride present in the air. First of all, very tiny amounts of chloride combined with light to produce globules of metallic (pure) mercury that are visible on the painting as black patches. This mercury then reacts with the remaining chloride resulting in the black changing to white. This causes old vermillion layers to change colour and exhibit white and black patches. What's more, they could not be mixed with the then lead and copper-rich pigments such as white lead, chrome yellow and verdigris. Due to efforts to protect the lucrative trade in expensive mercury vermillion, it took quite some time to get the practically identically-coloured cadmium pigment onto the market. As cadmium is also harmful to the health and environment, albeit to a lesser degree, these days the colour vermillion is produced on the basis of harmless, stable pigments.

The battle between the dragon and the elephant

Did you know that…?

The word vermillion derives from the Latin ‘vermiculus’ or ‘small worm’. It probably refers to a wormlike creature that produces a vermillion-red dye. In German the word ‘Zinober’ is used, referring directly to cinnabar, which in turn comes from the Greek ‘kinnabari’, meaning vermillion.

Royal Talens has the colour Vermillion in the following product ranges: