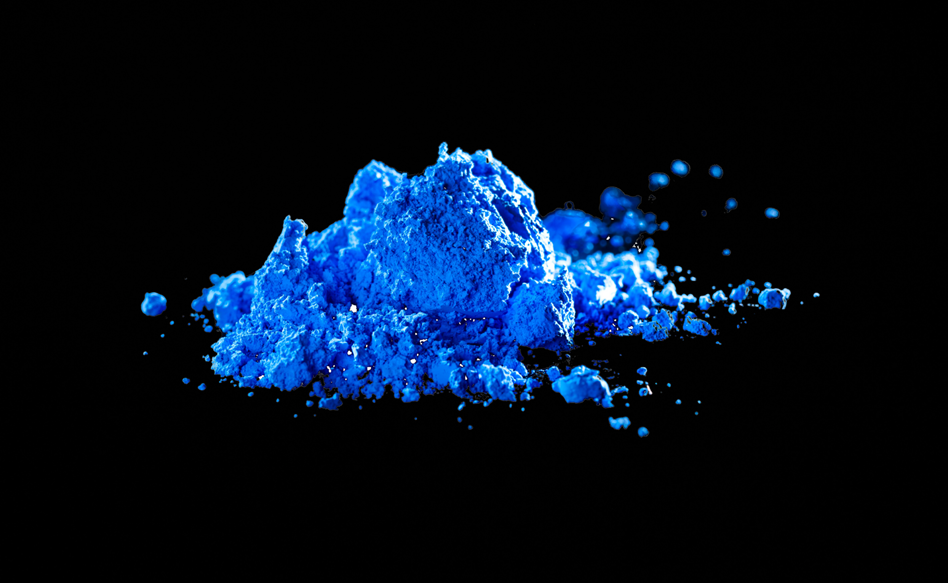 In the art of painting cobalt is mainly known as a colour blue. The pigment that was traditionally extracted from a mineral comes, however, in various shades, varying from yellow to red and from blue to green. It was traditionally used to colour glass and ceramics. The name is derived from subterranean sprites or ‘kobolds’. But for this we have to go far back in time, to well before the Common Era.

In the search for useful metals and stones, man discovered silver. It is easy to melt and, what’s more, has a beautiful sheen. However, there are other types of metal that look like silver and frequently they were mistaken as such, with some unpleasant consequences. Because when ‘fake silver’ was melted down, toxic substances were often released, which were lethal when inhaled. The ‘miners’ thought that this was the work of kobolds, who stole the silver and replaced it with a toxic metal or kobold. Later this became known as cobalt. We now know that there is a totally different explanation. Cobalt compounds attract arsenic, which when heated is released as extremely toxic arsenic trioxide.

Glass as raw material for paint

Back in ancient times various tinted minerals containing cobalt were used to colour glass and ceramics. A well-known blue-coloured glass is smalt, which has been used as a raw material for paint since the middle ages. The glass was ground and then mixed with a binder. For a long time this cobalt blue served as an affordable alternative for ultramarine which was made from the Afghan semi-precious stone lapis lazuli, as this was difficult to obtain and was very expensive. The big disadvantage, however, was that if too much oil was added the colour blue would eventually change to a dirty grey-green.

It was the French chemist Louis Jaques Thénard who in 1802 started to experiment with a cobalt-arsenic compound which was used in Sèvres porcelain. He discovered that a combination of cobalt oxide and aluminium oxide resulted in a highly stable blue pigment, the current cobalt blue. Later on, other colours based on cobalt were discovered as well. At the end of the eighteenth century, for example, in combination with zinc oxide, cobalt green was discovered. In the course of the nineteenth century the green-like Cerulean blue , cobalt violet, red cobalt and cobalt yellow were developed, with tin oxide, phosphate, magnesium oxide and potassium oxide, respectively. The red and yellow have meanwhile been replaced by the more stable cadmium pigments. The other colours are still used today and are known for their excellent lightfastness.

Cobalt pigments are exceptionally lightfast, but also extremely expensive. Depending on the colour, the price can exceed 300 euros per kilo. Of all the blue pigments, cobalt blue is the only one with a good opacity.

Royal Talens has the colour Cobalt Blue in the following product ranges: