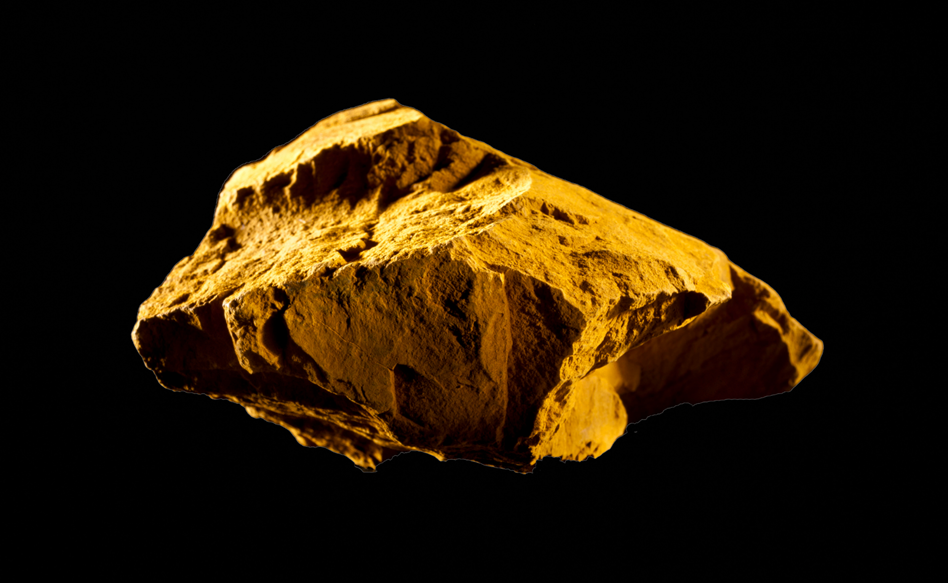 Since ancient times ochre has been used all over the world for various purposes. Diverse shades of the colour can be seen in, for example, prehistoric cave paintings as old as 350,000 years. The pigment is exceedingly lightfast and, moreover, can be used for all types of paint. These days the natural ochres have mostly been replaced by synthetic variants.

The word ochre is derived from the Greek ‘Ochros’, which means ‘yellowish’. The natural pigment is seen everywhere in the world where there is relatively large amounts of iron in the ground. The iron oxidizes and gives the earth the characteristic rust colours. And although we tend to think of a golden yellow when thinking about ochre, depending on the other elements present in the earth, the colour can vary from yellow to reddish and brownish, with even some slightly violet and bluish variants. The more manganese oxide there is alongside the iron oxide, the browner the colour. The name given to a certain shade of colour usually refers to the place where the pigment was extracted. Examples include sienna and umber,

named after the city of Sienna and the Umbria region in Italy, as well as Spanish Red and Naples Yellow. The latter in its original form contains toxic lead and so is not used anymore. The other shades of natural ochre, on the other hand, are completely harmless both for man and environment.

The most important colouring element of ochre is hydrated iron oxide. As the name suggests, the compound contains a substantial amount of water despite it being a solid. When the hydrated iron oxide is heated, the water evaporates and the colour changes. This is a process whereby yellow ochre turns red (red ochre, burnt ochre), the yellowish-brown pigment from Sienna changes to a clear reddish-brown (burnt sienna) and the raw yellowish umber turns to dark reddish-brown (burnt) umber. In volcanic regions this occurs naturally; however, by simply heating the pigment, the same effect is achieved.

In ancient times the best ochre came from Sinopia, a city on the Black Sea. Its exceptional quality made this ochre valuable and led to it being transported carrying a quality seal. The name Sinopia or Sinoper was even used instead of the name ochre.

Among the Aboriginals in Australia, too, the best ochre was a highly-valued and sought-after commodity. Australia is rich in ochres. When flying across the continent on a clear day, one will see nothing but the colours familiar to us from aboriginal paintings; what’s more, the patterns we see from the sky are also the same. A wonderful and almost mystical experience, completely in harmony with many aboriginal paintings that served as maps and that could only be read by initiates. The best red ochre was also cloaked in mysticism. Only the men of certain tribes had access to the ochre sites. Once a year they would go on a pilgrimage lasting days that would lead them to the sites that for the Aboriginals was sacred ground.

Ochre is still extracted naturally today, on Cyprus for example. A disadvantage is that the colour of the natural earth pigments may differ per location and the end user is never entirely sure what shade of colour is in the paint tube. It was partly for this reason that a few hundred years ago synthetic variants were already developed under the name iron oxides, which showed no colour differences from one batch to another. Both synthetic and natural ochres are used worldwide on a large scale. Not only in paint, but also, for example, in cement, asphalt for roads, synthetics and rubbers.

Did you know that…?

The name ‘redskins’ directly relates to ochre? As did many other primitive people, the Native Americans rubbed red ochre on their skin. In addition to having a ritual meaning, the ochre acted as an insect repellent. While hunting they were also less likely to be smelled by their prey.

Royal Talens has the colour Ochre in the following product ranges: