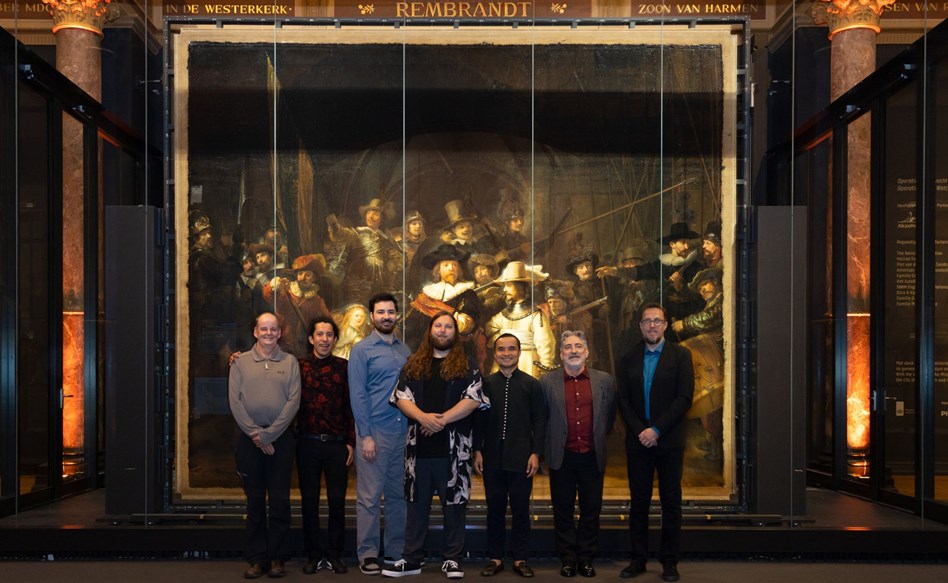 “Experiencing Rembrandt’s ‘The Night Watch’ recently (virtually through Rijksmuseum’s interactive tour of the painting to mark the 350th anniversary of the artist's death) and I was spellbound, to say the least, by his genial ability to portray light, movement and even sound, the qualities I always struggle to achieve in my paintings which, in my humble ambition to compare, look as if they were made in a different universe from those of Rembrandt’s! He’s the artist that influences artists of the following generations who strive to master such skills and understandings. And the only way to do that is to make a life long uncompromising commitment as Rembrandt did!”

Namchai’s watercolour depicting a rice field is full of light. Painted with quick brushstrokes but in a very skilled way. We see a carefully chosen colour palette, for example the red and blue reflections on water. The light on the backs of the people in the field frame them in a beautiful way. The transparency of water was achieved with elegance and ease through contrast between light and shadow. The painter shows great knowledge of the watercolour technique. The jury also liked the Thailand related theme of the painting.

In this painting we are invited to enter the world of childhood dreams of a candy shop and we see a long-gone era of small shops around the corner. The painter plays with distorted perspective and bright colour to achieve a naïve atmosphere. The image is full of joy and colour. The jury was impressed by the carefree fun of painting we could feel looking at this work.

“This painting was made using Rembrandt oil paints exclusively. The painter Rembrandt has been a major inspiration since I first picked up the brush. In this painting "Solitaire" you can see his influence in my attempt to create organic textures and a sense of draping natural light. Winning this competition would mean going to Holland to study Rembrandt's works up close, and also showing this painting in the Rijksmuseum.”

Technical perfection is the first word coming to mind looking at this work. The closed triangle composition accentuates the solitude of the depicted girl. The colour palette is nuanced and well balanced. The image evokes strong feeling, it is subtle but very intriguing. This work was the favourite of the public during the small exhibition in our company headquarter.

"Rembrandt is one of the first painters whose work I came across and he is one of those who have influenced me in an important way. His paintings struck me from the very first moment. The extraordinary handling of chiaroscuro, the intense colours, the light, and the realism are undoubtedly reflected in all my pictorial production."

A good composition and technical mastery in pastels. This work is on one hand photorealistic but also very abstract in the composition. On a higher interpretation level, you could see links to ecology and criticism of consumer society or philosophical thoughts about what remains of a great painter like Rembrandt. The composition is well balanced with interesting colour accents in the right places. The jury was impressed with the technical skill in this difficult medium.

“Narcolepsy - Self Portrait in Rembrandt colours glazing technique. All my Paintings are heavily influenced by Rembrandt. I especially admire his self portraits that on the one hand manage to be a brutally honest look at himself but on the other still convey this beautiful pathos. A difficult line to walk! So I try my best to not only be inspired by Rembrandts Chiaroscuro technique but also by his way of transporting emotional context. this Pic is kind of about me battling this sleep illness I had for some years with insomnia at night and being forcefully drawn back into the dream world by day. Was a tough time but its getting better now.”

A very interesting and expressive portrait of a person with piercing eyes and a tormented expression. The good contrast between dark and light areas accentuates the tormented expression of the depicted person. An emotional and convincing work of art. A good example of the glazing technique.

Sašo Vrabič, Girl at the Exit

“Rembrandt was always one the old masters I was inspired from. I'm sure it's because of portraits as a main theme and especially the light, contrast that is present in almost every of his works. I met this girl named Samsam in London and was willing to pose for me as that moment and the light was perfect. She was standing at the exit of a gallery surrounded by a daylight. It's almost like a negative image of Rembrant works concerning contrasts as he was doing mostly interiors searching the light in the dark spaces and this is almost exterior.”

The jury was impressed by the strength of this image. The depicted woman emanates a silent power which is also mirrored by the use of strong contrasts between light and dark colours. The woman’s expression and her profession give us a positive feminist message. There are also classical elements like the wood panelling and the shadow of the window, which link this painting with old masters. The excellent painting technique is shown in the white transparent blouse and the blue elements – those elements are full of life and motion.

“The idea of boundaries in nature, the limits the eye imposes between objects, the frontiers between things and the air which surrounds them, the light in which we see them: that idea has interested me ever since I was a student at a modern art school in Barcelona in the early eighties. I had studied Leonardo da Vinci’s Treatise on Painting, where he showed us how it is possible to blur those boundaries and use light as a means of giving shape to objects in an atmosphere that homogenizes them. And then, while listening to a song by King Crimson, “The Night Watch” from the ‘Starless & Bible Black’ album (the ways of Rembrandt are inscrutable), my interest in Rembrandt, dormant at the time, re-awakened. These highly descriptive lyrics seized the essence of the famous painting, and they made me want to see the master’s work again and study it more deeply. I had not forgotten him since the time when, as a child, I looked at my father’s art books, but I had not given him much attention since then. I went back to those reproduction books and visited Paris as soon as I could to stand in the actual presence of some of his masterpieces in the Louvre. Paris is nearer to Barcelona than Amsterdam and suited my not-so-glorious young artist's budget. As I stood there in wonder, feeling that I was on the point of witnessing Rembrandt’s work materialize in front of me, I began really to see: paint became a flash of enriching light hitting vigorously on gold, flesh or precious fabrics. At the same time, in mysterious darkness, the paint explored those frontiers which interested me with infinite delicacy, and at a very deep level. Thirty five years later I still feel the sense of awe: it still lives profoundly within me. I learned that Rembrandt’s painting was not about telling a story - though he was more than capable of doing that - but about grasping the beauty, the crudeness and all the tenderness in our lives, and restating them transfigured, sending them back to us forever in the form of shape, colour and matter, on a flat surface where the world is projected and time stops altogether. We are made to see, and then we marvel at what we have seen. Today, for the most part, I paint imagined landscapes, and I keep trying to explore where those frontiers are. Many years of painting and long observation of our beloved master’s work have taught me one thing: I know now that, no matter what questions we put to painting, painting will answer only in the form of another question in response. Asking myself what questions Rembrandt may have put to his own painting makes me feel that he is close, as a familiar, benevolent, tutelary spirit.”

A very atmospheric landscape in classical colour palette. The perspective and character of the landscape reminded the jury of works of Philips Koninck, a 17th century painter and alleged student and friend of Rembrandt. Great use of the glazing and layering technique. There is a certain tension in the painting, you feel the weather changing, probably a storm is coming. A balanced palette with many dark colours, very Rembrandt-esque.