We are excited to announce that BreakThru Films will be using our Cobra line of oil paints to create a film in a hand-painted animation style similar to the studio’s 2017 production ‘Loving Vincent’! ‘Loving Vincent’ is the film about the life of Vincent van Gogh that won the hearts of fans around the world and received several awards and nominations.

Cobra oil paints are our innovative, water-mixable oil colours that can be used and cleaned without any harmful solvents, yet still have the many benefits of traditional oil paints. This allows the approximately 70 painters hired to paint the frames for ‘The Peasants’ to paint the frames and clean their materials without having to use turpentine or white spirit, which is better for both the environment and the health of the artists. The artist quality paints provide exceptionally high pigmentation, which allows for pure and highly saturated colours on the many canvasses used in the film.

‘The Peasants’ is based on the Nobel-prize winning novel by Władysław Stanisław Reymont and directed by Dorota Kobiela. The film will display the tragic story of a peasant girl called Jagna who is in love with a man named Antek, but is forced to marry his much older, wealthy father, a farmer named Boryna. With time, Jagna becomes the subject of envy and hate amongst the villagers and is forced to fight for her independence. The beautifully depicted story takes place in the Polish countryside and ties into the changing seasons, hard labour in the fields and traditional local holidays.

The training of the artists in the studio in Poland begins on March 8, 2021, after which they will start working on the frames for the film. ‘The Peasants’ is planned to premiere in 2023.

To find out more about the team, story and studio, visit their website: www.thepeasantsmovie.com.

We are proud to have been selected to work with BreakThru Films once again. Royal Talens was previously selected as the preferred supplier of paints during the production of the studio’s successful film ‘Loving Vincent’ and will now provide over 1,300 litres of Cobra oil paints to be used in the production of ‘The Peasants’. We are very excited to not only provide the materials, but also to make the experience more pleasant for the artists working on the film by working with solvent-free oil paint. 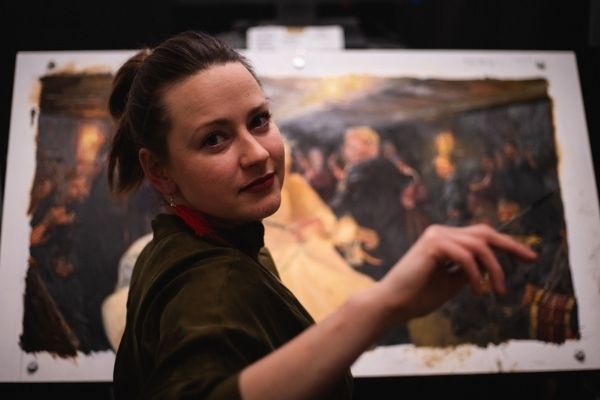 Creativity is one of the most powerful human assets. It stimulates our ability to express ourselves, to learn and to connect. It has the power to make the world a better place. Ever since we discovered that in 1899, it has been our goal to stimulate as many people as possible to express their creativity.

We look forward to the premiere of this beautiful film in 2023!